Can My Competitors Click Me Out of Business? Internet Marketing Mysteries

Nearly every business out there has a rival. Some of these rivalries are much more cutthroat than others. Some competitor rivalries even lead to suspicion of sabotage.

One of the top questions we hear when preparing a new Google Adwords campaign is, "What if my competition tries to click me out of business?"

Is it possible that Circuit City went out of business because Best Buy employees spent their entire days clicking on Circuit City ads, racking up a fortune in ad spend that left them so deep in the hole they couldn’t recover? And maybe Barnes & Noble did it to Borders. Next, Bing is going to do it to Google. When will the madness end?

Good news: Google already thought of this potential problem, and they even thought of ways to prevent it from happening.

In short, your competitors can’t click you out of business (you might be able to search yourself out of business, but that’s a topic for another day).

Fake clicks. Spam clicks. Competitor clicks. Google refers to these things as invalid clicks, and they don’t count against your ad spend. In other words, it’s impossible for your competitor to click you out of business.

Does that mean Google won’t charge me if one of my competitors clicks on my ad once?

Okay, so you’ll probably still be charged for that. But one fake click isn’t going to ruin your campaign or run you out of business.

But what if my competitor strategically sets up people around the globe who go from public computer to public computer, clicking on my ads until I’m out of budget?

Well, I suppose that’s possible, but it’s extremely unlikely. If your competitor is going to such great lengths to eat up your ad budget, they’ll probably be the ones out of business. The cost to orchestrate such a scheme would be astronomical, unless of course they had a team of volunteers doing this. Naturally, anything can happen if you want to create enough conspiracy theories.

But how exactly does it work? How can Google determine which clicks are fake?

In the words of Google, "Each click on an AdWords ad is examined by our system, and Google has sophisticated systems to identify invalid clicks and impressions and remove them from your account data." In other words, Google is really smart. It knows if your competitors are trying to click you out of business.

And what happens when they do find these invalid clicks? How do I get my money back?

Wait a second. Why wouldn’t Google just charge me for these clicks? Doesn’t Google want to get as rich as possible?

Okay, this sounds pretty cool. But where’s the proof? I’m still afraid of my competitors sitting around and clicking on my ad.

The proof is right in your Adwords account. You can see how many invalid clicks your ads have gotten at the Campaign level. Just click on "Customize Columns" and add "Invalid Clicks" under the Performance metrics. 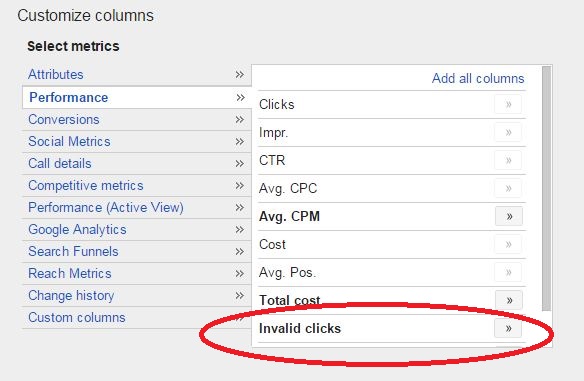 Apply the change and you’ll see the number of invalid clicks each campaign has gotten during the specified time period.

Look at how much money Google saved this campaign by detecting invalid clicks. At the average cost-per-click of $2.32, this amounts to $11,342.48. A nice chunk of change for your business. These are clicks that Google determined were invalid before you were even billed for them. Pretty cool, huh? It’s like you’re busting shoplifters before they even come into your store.

In rare events, Google will discover invalid activity after you have been charged for the clicks. When this happens, you will notice an "Invalid activity" credit in the billing section of your account. You can find these easily if you filter by adjustments and look for "Invalid activity": 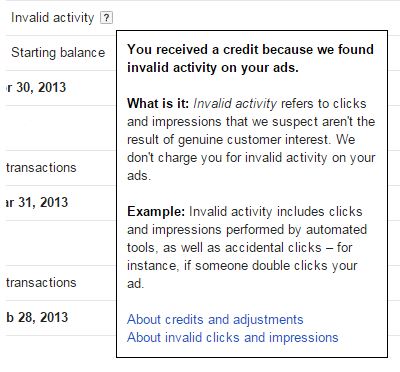 In this case, we found only one instance of an invalid activity credit since the campaign began—and it was only for $3.73. Google is very good about weeding out these invalid clicks before you get billed, allowing your ads to run longer each month.

How do I know Google is catching all of the invalid clicks?

In reality, you don’t. You do have to place a certain level of trust in Google. Here are a few things to keep in mind:

This post is part of Internet Marketing Mysteries, a weekly column addressing actual client questions related to SEO, analytics, website best practices, and any other topic connected to internet marketing. Have a question you’d like to see tackled in a future post? Let us know in the comments.

Can I Turn Off Paid Ads Once the SEO Starts Working? Internet Marketing Mysteries