Web design is actually more alive than ever

Earlier this week, an article from UX Magazine ran on Mashable under the headline “Web design is dead.” This headline follows the typical strategy of many content sites: “Let’s piss a bunch of people off and get them to click, comment, and share so we can earn even more advertising dollars!”

The article had 17,000 shares within 3 days, along with a fair number of angry comments talking about what a load of crap it was. During that same 3 days, well over 400,000 new websites were launched. It’s safe to say that at least 17,000 of those new sites used some level of web design.

Let’s assume that every website could just use some pre-existing template. This seems like a pretty great business practice, right? Wouldn’t you want your website to look exactly the same as all your competitors? Imagine this situation: you and your competitor have the same template for your websites. No biggie, right? Gets the job done and didn’t cost much. But what happens when your potential customer visits your competitor’s site and thinks it’s yours? Your competitor gets the lead or sale, that’s what happens. If your website doesn’t stand out, your company isn’t going to stand out. You become just like everyone else, and whatever unique value proposition you have gets lost in the sameness.

I’ll admit to using a free template for some of my personal blogging projects. You know what I find embarrassing? When I stumble across other sites using the same template. People aren’t going to remember my sites very well if they look like every other site in the world.

Let’s pretend that this is accurate and that there have been no new trends, nor will there be any new trends in the future. The thing is, it doesn’t matter if you agree with this premise. This same line of thinking just killed off music, literature, art, movies, and everything else creative. Last I checked, music, movies, and books have yet to die, but there have been no truly “new” developments in any of these industries in years. Most of today’s popular music is just recycled from older music. There’s nothing new about Taylor Swift, Bruno Mars, or anything else you’ve listened to in the last five years. Don’t even think about bringing up a decline in album sales; today’s most popular musicians are richer than ever without doing anything new. Why? Because there is a demand for new music even if it isn’t new. Movies? Some of the biggest movies are reboots of movies we saw two decades ago. Books? No one has done anything new in literature since James Joyce, but books are selling a lot more copies than they did back then.

Even if web design patterns are mature, there’s still the need for design. A web designer’s job isn’t to create something brand new and earth-shattering every time he or she designs a new website. Rather, web design is about creating the best site for a particular business/brand/industry/etc. To claim we don’t need web design because there are no new design trends (which is total hogwash anyway) is to claim every creative industry is dead.

Diagnosis 2: Even if we accept the maturity of web design patterns, we still need designers to create the right pattern for the right business. Maturity isn’t the same as death. Things can exist at maturity for a very long time.

Symptom 3: “Automation and artificial intelligence are already doing the job”

The claim here is that machines can design websites faster and cheaper than people. Therefore, we don’t need people to design.

Well, to the author of this fine piece Mashable clickbait, I’d like to point out that a robot could have written your article. And that robot probably would’ve produced a more technically correct document. But would it have been a better article?

Let’s think back to when Watson defeated the best human Jeopardy! players ever. Watson was designed to answer questions, and it did a pretty damn good job. Watson’s win was pretty much inevitable though. Unlike its human competitors, it was programmed only to buzz in when it was very confident it had the correct answer. Watson also was programmed not to buzz in early (if you buzz in early, you’re locked out), and its response time was 10 milliseconds. It’s pretty hard for a human to buzz in that quickly. Watson won because humans programmed it to win, but the machine still wasn’t perfect. 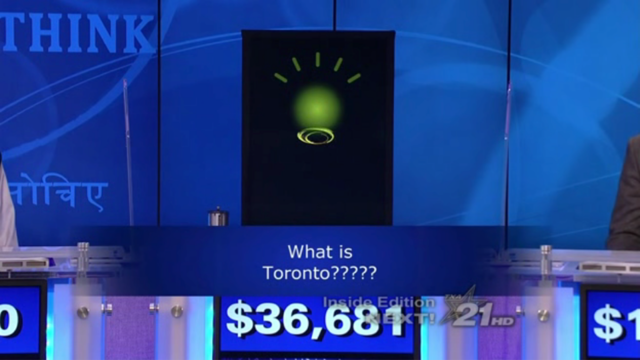 So what does Watson have to do with web design? Doesn’t the computer just prove that machines can beat humans? Sure, when everything is completely objective. But web design isn’t purely objective. No creative art form is. Automation and artificial intelligence are currently limited to what humans can program the machines to do. And they can’t always understand nuance. This could result in a design that looks flawless but doesn’t function worth a damn for your company.

There’s a bigger issue at play here though. Most business owners want to work with people, not a robot. With a human web designer, you can have a conversation and a relationship. With a computer-built website, you can watch it do its thing and accept the finished product.

Diagnosis 3: Automation and artificial intelligence can definitely do the job. Can they do it better? Technically better, maybe. Actually better? Probably not. And people still like working with people. AI won’t be replacing web design anytime soon.

The argument: a Facebook business page now does more than a website did in the 90s. Therefore, websites aren’t necessary anymore.

Great, but it’s not the 90s. And Facebook page reach is diminishing by the second. And let’s not forget that Facebook is still a social network. People are there to post cat videos, share baby pictures, and argue about politics. Do they interact with businesses? Sure. Is that the primary objective? Hell no. And if it ever becomes the primary objective, then Facebook will go away pretty quickly.

To say that Facebook pages are rendering web pages useless is about absurd of a claim as I’ve heard. A Facebook page does very few things that an actual website can do. Facebook can’t do e-commerce. Facebook signup forms are a joke and come with very limited customization. And there are still plenty of people who don’t do Facebook. It’s been a long time since I’ve encountered someone who doesn’t do the internet.

Can a business survive with just a Facebook page and no website? Maybe a very small segment of businesses. But for the majority of businesses, Facebook is a tiny supplement to their website and overall internet presence. Facebook is a way to help build a brand and interact with customers. But it can’t exist in a vacuum.

Symptom 5: “Mobile is killing the web”

Here the author suggests the increase in mobile device usage is actually making websites obsolete. He goes on to say that every website needs an app.

There’s so much wrong with this argument that it’s hard to know where to start. So let’s start here. Mobile device usage may be going up, but it isn’t necessarily going up at the expense of other web usage. In fact, the latest research actually shows that desktop internet usage is also going up (just nowhere near as fast as mobile). And most businesses are still seeing the vast majority of their traffic coming from desktop. If you only focus on your mobile app and ditched web design, then you’ll be losing a ton of your customers.

But let’s pretend that mobile really is killing the web. The article claims that people only go to websites when they don’t have an app (and that it really sucks to type in the web address). Major businesses want you to download their apps. Your customers will never find you if you don’t have an app. Blah, blah, blah.

Guess what? Your potential customers will probably never find your app. Mobile apps work for very large companies that have an actual need for an app that provides a unique experience on a mobile device. No one has ever chosen their landscape company or their dentist because they randomly happened upon their mobile app. People need to access websites to find these things.

And let’s pretend for a second that every single website launched a mobile app. In reality, the vast majority of those apps would never get downloaded. Can you imagine if you could only access any given company through their mobile app? Your phone would have thousands of apps. You’d spend a lot more time scrolling through your apps to find what you need than you would typing in that old web address.

Diagnosis 5: Mobile is changing the web and making web design more important than ever. Sites now have to look great and unique on multiple devices.

So just how close to death is web design? I’d imagine that everyone who ever reads this article will die before web design even gets to its death bed.

Your Analytics Data Says You Need a New Website