No matter how quickly the world of SEO changes, tactics of the spammier olden days of the industry refuse to die. In spite of much evidence to the contrary, many people cling to these old ideas, some of which were never true. It’s almost enough to make you imagine clans of SEO wizards and witches tossing meta keywords and some eye of newt into a bubbling cauldron while mumbling their “proprietary” SEO spells.

Originally posted back on a Friday the 13th in 2015, these 13 SEO superstitions remain in play today even though much has changed in the past year. Just for fun, we’ve added a couple more to the list in an effort to stop the pervasive nature of these myths.

If a black cat crosses your path, you might trip. If you walk under a ladder, the ladder might fall on your head. If you break a mirror, you might get a shard of glass embedded in your face.

Aside from these obvious consequences, very few people actually believe that bad luck comes from any of these events. Yet many people still try to avoid them. The black cat thing is kind of silly, but there are pretty logical reasons why you wouldn’t want to walk under a ladder or break a mirror. This isn’t superstition. It’s just common sense.

In the world of SEO and internet marketing, there are plenty of things people believe that aren’t rooted in common sense. Some are based on really old practices that worked over a decade ago. Others are based on gut feeling, hearsay, or total misinformation. Whatever the reason for abiding by these practices, they don’t work—at least not as advertised. Here are 13 crazy SEO superstitions that people actually believe.

1. If I do Google AdWords, I’ll rank better organically. 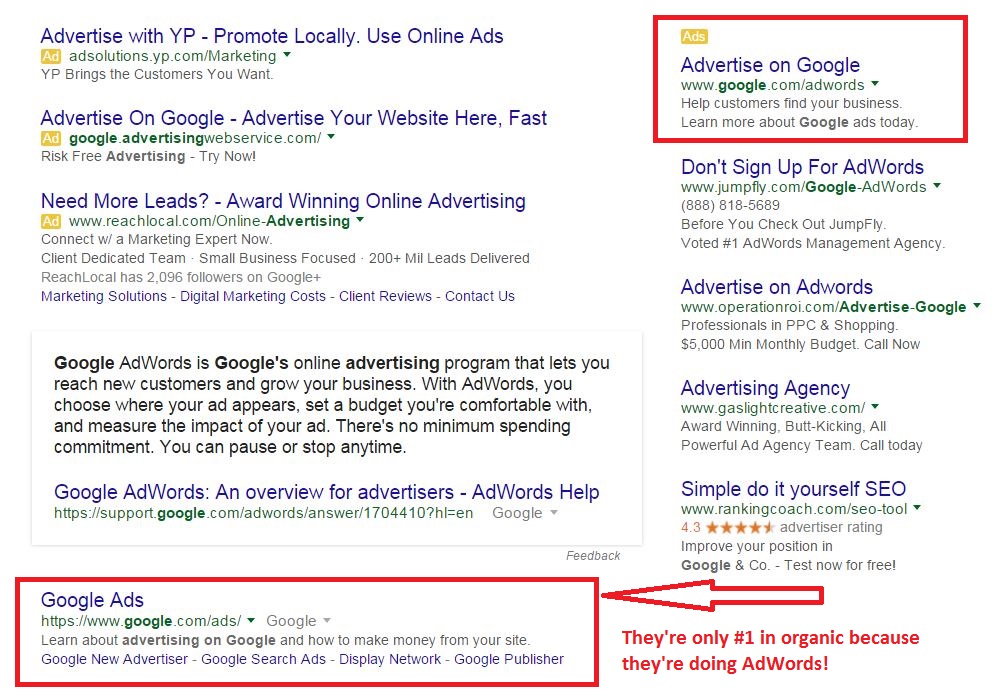 This is one of the most pervasive myths in the industry. Yes, Google would love for you to advertise on their networks. Yes, you will drive more qualified traffic and leads if you use Google AdWords. What won’t happen is Google playing favorites in the organic search results because you’re spending a couple grand a month on their advertising service—the advertising service that’s producing a positive return for your business. The opposite is also not true in this case. If you stop doing Google AdWords, you won’t lose your organic rankings. You will, however, lose qualified traffic and leads.

2. If we’re not ranking #1 for our main keyword, we won’t be able to stay in business.

It’s the Holy Grail of SEO—ranking #1 for your coveted keyword. If you get there, all your dreams come true. If you don’t, you’ll quickly go out of business. Except only one website can be #1. So why don’t all the other ones go out of business? As important as high visibility is, being ranked in Google shouldn’t make or break your business. You need to diversify your marketing strategies and make sure you don’t rely solely on Google. If you do, the next Google update could mean the end of your business for real.

3. If we rank #1 for our main keyword, we will reach all our business goals.

4. If I put all my keywords in the meta keywords tag on every page, I’ll rank better.

Let’s go over this for the millionth time: meta keywords are not a thing anymore. If you’re still using them, you’re wasting your time at best and risking a penalty at worst. There is absolutely zero value in using them, and no one who’s an expert in the industry would recommend you do.

5. If I use Google Webmaster Tools (now Google Search Console) or Google Analytics, Google will be more likely to penalize me. 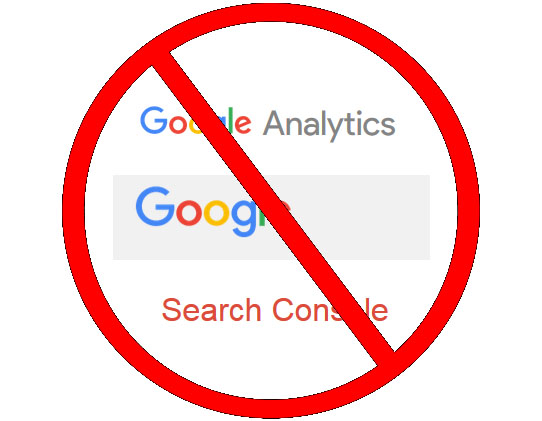 I’ve known people who legitimately believed this. The theory is that by using these Google products, you’re giving Google more access to your site and all the things you’re doing to help your site rank better. This in turn makes Google scrutinize everything you do. Therefore, by not using Google products, you will rank better in Google. Seems logical, right? Sure, in Bizarro World.

6. If I build any links, Google will penalize me.

Link building is not dead. But it’s not what it once was either. There’s plenty to suggest it’s still an important ranking signal, but there’s also a lot of fear that any link could be the one bad one that’ll land you the big penalty. That doesn’t mean you can’t build any links. What it does mean is that you shouldn’t be building links with the sole purpose of gaming the search engines. No link schemes, no ridiculous forum/blog comments, no shady directories. If you have to ask if a particular link could be bad for your website, then don’t build it.

7. If someone does negative SEO to our site, we’ll never rank in Google again.

Negative SEO is one of the biggest fears in the industry. The theory is that someone else can get your site penalized by building a bunch of spammy links that would get your site penalized if you had built them yourself. While there are some supposed examples of negative SEO happening, there’s no evidence that it’s anything to worry about. There are just as many examples of people who dropped mirrors and then had bad things happen to them later. There are definitely people out there trying to do negative SEO, but the odds of you ever being a victim are incredibly slim.

8. If I have a high bounce rate, I need a new website or I’ll lose my rankings.

9. If I swap out keywords, I will be able to rank better for more keywords.

Keyword swapping. Believe it or not, this is a real thing. And by a real thing, I mean some people actually believe in it. Of course it isn’t actually a thing that works. I guess the premise is that it’s muscle confusion for the search engines. Do you really think today’s sophisticated search engines are going to be tricked because you threw in some different keywords this week? Machine learning, people.

10. If we lie about our business address, we’ll rank better in our target area.

You want your pizza place to rank for Minneapolis pizza even though it’s 45 miles outside of Minneapolis. Well, guess what? When people are searching for pizza in Minneapolis, they want pizza that’s actually in Minneapolis. Listing your address as Minneapolis on your website isn’t going to make Google believe you’re located in Minneapolis. However, it might confuse your customers and lead to some angry online reviews.

11. If I buy a lot of domains and redirect them to my site, I’ll rank better.

Aside from owning your own domain and any variations that people may accidentally use, there’s little value in stockpiling domains that redirect to your site. When you get that email telling you to purchase bestwebdesigncompanyinminneapolis.com for $15,000, know that owning that domain is only going to help your site if someone actually tries to visit bestwebdesigncompanyinminneapolis.com, which might be two people in the history of the universe. Google isn’t going to give you better rankings because you own some spammy domains.

12. If I submit a disavow file to Google, they will be suspicious of all our marketing efforts. 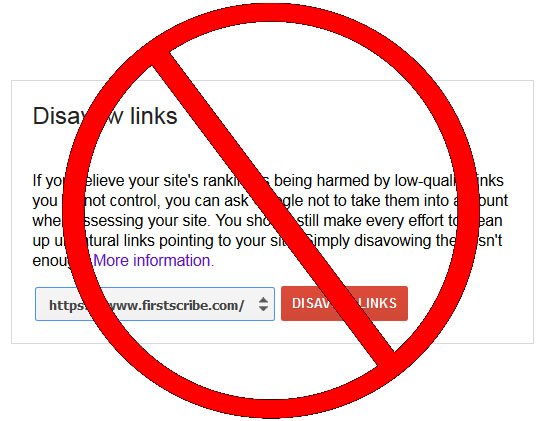 The purpose of the disavow file is to tell the search engines, "Hey, I don’t really want these sites linking to me." The search engines, in turn, won’t count those links for or against you. The disavow file is not a confession of guilt. It does not make Google scrutinize every move you make or every breath you take. Google is not The Police. Google is not trying to play "gotcha."

13. If our rankings go down, that means Google penalized us.

The moment your rankings drop at all, you want to point a finger. It’s the evil Google! But before you go playing the blame-game, remember that there are a multitude of reasons why rankings fluctuate. Perhaps there was an algorithm update. Or maybe your competitors are becoming more relevant than you. Or maybe you accidentally noindexed your site for a few days. If your rankings suddenly drop, there are plenty of things you should rule out before accusing Google of penalizing you.

Bonus: If we do any SEO at all, Google will eventually penalize us.

Perhaps the wackiest SEO superstition of all is the one that accuses all SEO of being bad. There are plenty of people out there who believe SEO is a scam at best and a surefire ticket to Google blacklist at worst. The truth is, you need to optimize your site for search engines. The search engines actually want you to optimize your site because that makes it easier for them to determine the most relevant results. If you don’t do any SEO at all, you’ll have a hard time ranking for much of anything. Of course, if you do SEO the wrong way, then it’s possible that you’ll incur a penalty. But if you follow best practices and stay within the guidelines of Google and Bing, you’re going to be okay. Probably better than okay.

Bonus #2: If we use our keyword a certain number of times, we’ll rank better.

Ah, keyword density. It’s hard to fathom that anyone would believe in this concept in 2017. Obviously your content needs to be about what you’re trying to rank for, but the notion that using a keyword a set number of times in proportion to the length of your content is just patently absurd. Search engines are much smarter than that. There is no magic number for creating content that ranks well. Rather, you should write content that is effective, authoritative, and accurate. If your content is good, it’s possible to rank for a keyword even if you only use it once. In fact, with search engines as smart as they are, you can sometimes even rank for a keyword phrase that you haven’t used word for word in your content.

There are some really great automated tools available. But if you are relying on some SEO site evaluator to tell you how good your site is, then you may need to rethink your strategy. If you’re a website owner, you’ve probably gotten a fair number of emails that tell you they detected SEO errors on your site. If you actually followed up (which is a waste of time), they would show you some bogus results with thousands of SEO errors. Many of those errors would be tied to old tactics that haven’t proven effective in search rankings for almost a decade. The truth is, your site can perform very well in search even if you don’t follow every supposed best practice out there. The other truth is that these automated SEO evaluators don’t update anywhere near as often as the search algorithms. In other words, the results are probably a relatively accurate reflection of how SEO friendly your website was 6 or 7 years ago. This isn’t to say you shouldn’t use automated tools to evaluate your SEO. Just make sure you have a reliable tool, and don’t take the results as gospel truth. As with anything else in life, you need to use common sense.

If you believe any of these things, then there’s a good chance you’re going to waste your time and not see any results. You might as well just stand under a ladder and wait until something falls. Maybe it will be a big sack of money.

How to Find the Right Local Web Design Company