How to compare agency proposals: 5 questions you need to ask yourself before signing

You've spoken with multiple salespeople. You've sent out several RFPs. You've discussed the situation with your team. But now—despite your best efforts—you're stuck.

It's okay. Even the savviest business people have this same struggle. Hiring a website design or digital marketing agency is a big decision and making the wrong choice can have a significant impact on the future success of your business.

If you want to compare your proposals thoroughly and properly, you need to know what to look for and the right questions to ask. If you keep reading, I'll equip you with both of those things so you can make that decision with confidence.

Don't look at the prices first!

Skipping straight to the price tag is by far the biggest reason why many businesses end up ruling out the best agencies.

When choosing a new novel at the bookstore (yes, I still prefer a bookstore), you wouldn't read the very last page to see if you'll like the ending, would you? Of course not! Besides the fact that it would be a major spoiler, the ending alone—without any other context—isn't going to have nearly the same effect.

The same is true of the last page of a proposal. Many factors were considered, and a lot of time was put into coming up with that specific number. The least you can do is hear them out first. If they know what they're doing, they should be able to explain why what they're offering is a better value and one you should absolutely consider.

If you do get to the end and the quote is way outside your budget, fine, you can toss it out. Nobody said you have to like every book you read, but you do need to actually read it to have an opinion on the matter.

Questions to ask before signing a proposal

Okay, so now that you've agreed to start at page one, it's important to have the right questions in your head as you're reading through the proposals. Here are the top five that we recommend every decision-maker asks themselves before they sign that dotted line.

1. What's really included in the scope of work?

If you are going to compare two or more proposals, you need to first understand what it is you're comparing. While a Mazda and a Maserati are both cars, it doesn't take a genius to realize they're offering completely different things.

Go through each proposal and pick out the details of exactly what you're getting, so you can compare apples to apples.

If they don't mention a particular service or are overly vague in their language, be sure to ask them to clarify it for you.

2. Is the proposal personalized?

Just to be clear: when I say "personalized" I'm not talking about how it looks. Just because one proposal is flashier than another doesn't mean it's better. In fact, it's probably trying to distract you from its lack of substance.

Don't get hung up on the format either—pretty much every proposal is built from some kind of template, and that's okay.

Rather, did they personalize the contents to your business? Did they ask the right questions and actually get to know you? Little touches like including a page with your unique goals and pain points show you they were listening.

3. Is the timeline realistic?

Are they going to get the job done when you need it? More importantly, is the timeline they're suggesting reasonable?

If one proposal says your project will take 6 months and another says only 1 month, you should ask both companies to explain their timelines. Chances are, you'll get a lot more thought from the 6-month option.

Let's say you really want your fully responsive new eCommerce site ready to launch before the start of the holiday season, but it's already mid-October. Would you rather have an agency be upfront with you and explain why that's an unrealistic expectation, or tell you they can do it but cut every corner along the way?

If a super-fast turnaround is the most important thing to you, then don't be surprised when you need to redo your website after only a year or two.

4. How will success be measured?

What are you really receiving with these proposals?

Are you getting a bunch of things and stuff? Or will they be taking a more value-based approach that's going to deliver measurable results?

Read the proposals carefully and you'll start to see which ones have more thought and strategy behind them.

Are you receiving two blog posts, four hours of SEO work, and one email campaign per month because that's what they give all their clients? Or have they provided sound reasoning—backed by data—for why these services were chosen as the best methods to reach your goals?

If it only mentions the former, you may want to press them on this.

5. Are there any red flags in the small print?

I know, I know. I'm asking you to do something pretty insane—but hear me out.

It's one thing to scroll as fast as you can through the terms and conditions for a software update on a free app. It's another thing entirely when it's a multi-thousand dollar investment and the potential profitability of your business is on the line.

What happens if you end up having a disastrous experience getting your website launched, and now you're stuck in a year-long marketing agreement?

What happens if—months or years down the road—you want to sever ties with your agency partner, only to be informed that you don't actually own your website?

All I'm saying is, you need to read the small print in the proposal. You may regret it if you don't. 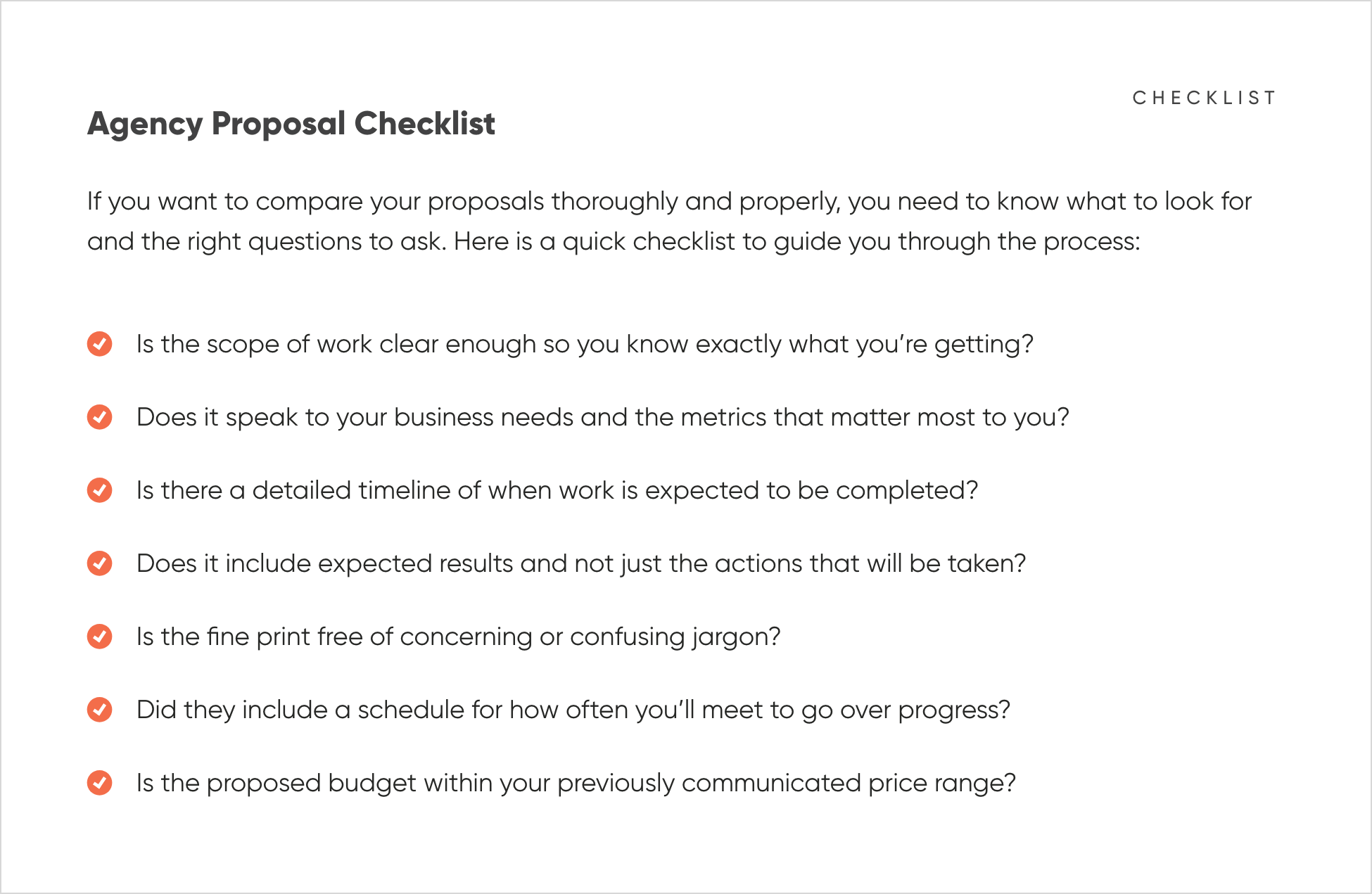 At the end of the day, you're comparing more than just the proposals in front of you. If this is going to be an agency you trust with designing your website or taking on your digital marketing efforts, there are other, less tangible things that should be considered.

If you're still torn between two or more frontrunners, ask yourself the following questions:

Whichever agency feels like more of a culture fit for you and your business is probably the one you should ultimately choose.

Dial in your digital strategy with the experts at Perrill

The Perrill team is comprised of collaborative experts in the latest and most proven trends in website design, development, and digital marketing. In more than 25 years as the original Minneapolis digital agency, we have helped countless local and national businesses establish themselves as online industry leaders.

Contact us today to learn more about how to craft and execute a strategy designed to get the most out of your marketing dollars.

Follow
Greg Johnson is a Copywriter at Perrill. He takes great pride in crafting creative, strategic content for his clients that their audiences find value in and actually enjoy reading. When he’s not typing away at his work computer, you can usually find Greg typing away at his home computer, writing superfluous stories and embarrassing poetry.
Follow
prev Post

6 Reasons You Should Keep Marketing When Results Are Great